The name of the Roman Emperor Maximinus Thrax, who ruled between 235 and 238 CE, has been identified for the first time on an ancient Roman milestone, according to recent research by scholars from the University of Haifa on the territory of ancient Sussita. 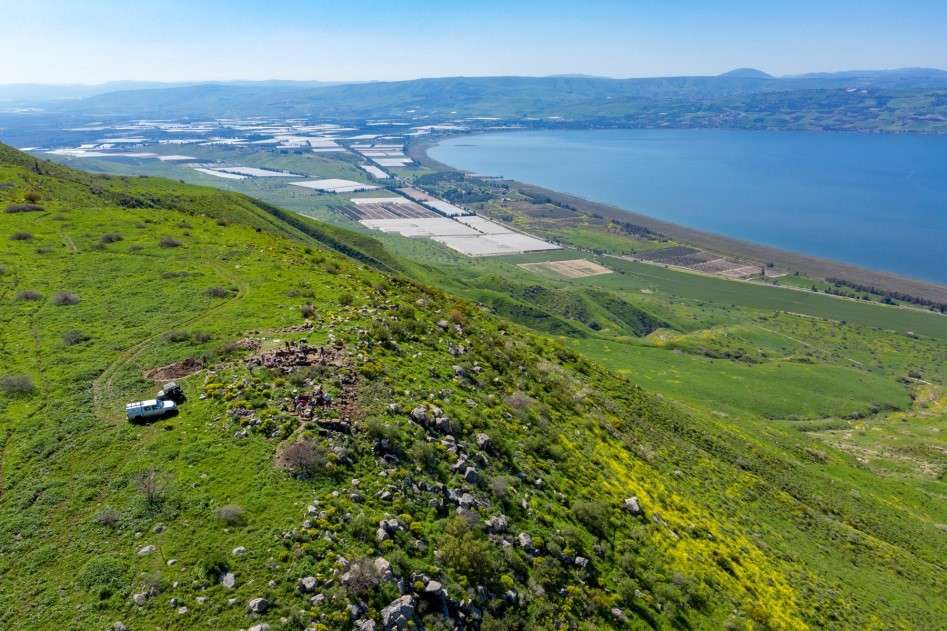 The fort, west of Mevo Hama with a commanding view of the road east of the Sea of Galilee. Photo: M. Eisenberg

This is the first inscription that scholars have been able to identify on a milestone on the road from Sussita, east of the Sea of Galilee, to Paneas in the northern Golan. Because the road was built much earlier than the reign of the emperor whose name was deciphered on the milestone, it apparently attests to extensive reconstruction of the road at that time. These were years during which the Roman Empire was weak and such major road work, especially in outlying cities in the empire, had become increasingly rare.

The ancient city of Sussita has been excavated for the past 20 years by an expedition from the Zinman Institute of Archaeology of the University of Haifa. The excavation has now made it possible for the Israel Nature and Parks Authority to develop Sussita National Park for public visits. Sussita was the only polis (main city) in this part of the Golan and scholars are seeking to learn about the relationship in Roman and Byzantine times between this city and its agricultural hinterland and the villages in its territory. In recent years the research has gone beyond the boundaries of the city itself to the territory of Sussita, in the central Golan and especially the southern Golan.

As part of this regional research project, Dr. Michael Eisenberg, Dr. Mechael Osband and Ph.D. candidate Adam Pazut are studying a milestone that was found north of the Sea of Galilee and is now in the garden of a resident of Moshav Ramot. Such milestones were set along roads at regular distances of one Roman mile (about 1480 m, which were 1,000 double steps) from a city. In the case of Sussita, above the eastern shore of the Sea of Galilee, the milestones were set along the Roman road that passed there and ended at Paneas.  Over the years a number of milestones were found on this road, but only on one that remained in its original location was an inscription found – which scholars had been unable to decipher.

It was Dr. Gregor Staab of Cologne University in Germany, an expert in ancient Greek epigraphy, who came to the aid of the Israeli scholars. He was able to discern the name of Emperor Maximinus Thrax, who ruled the Roman Empire for about three years, between 235 and 238 CE. The list of titles, as well as the name of his son, also appeared. This milestone, and  two others that had been moved to  Moshav Ramot, could finally be read after so long by applying a paper squeeze over the grooves in the basalt stone and closely examining the resulting impressions.

In the mid-third century CE the Roman Empire was in decline. So far it has been unclear whether at this time the main road east of the Sea of Galilee and from it to the Golan was still in use, and therefore what the nature of economic, cultural and social ties between the cities in the region was unknown. The content of the inscription provides proof of the road’s repair, meaning that it was still in use at this time.

Milestones served to mark distances and provide a sense of security, but above all for propaganda purposes – by means of them, the Roman government showed its control over the main roads, under the empire’s rulers, past and present, as if to say: “You are safe under protective wings, but never forget that these are the wings of the Roman Empire.”

Another find unearthed by archaeologists this year is a Roman fort with a controlling view of the Roman road east of the Sea of Galilee. The fort, at a site called Ayun Umm el-Azam was discovered west of Kibbutz Mevo Hama in the southern Golan Heights. Its strategic location was not lost on the Syrians, who built a military position over the ruins here before the Six-Day War.

Excavation has revealed remains of a strongly fortified complex built of courses of basalt stones, measuring 15 x 20 m, with a large adjacent courtyard. In the center of the structure was a tower, which over the years developed into a farm or monastery during the Byzantine period (the sixth century CE). The excavators also unearthed remains of a colorful mosaic, a basement and remains of ancient agriculture. A huge oven, about 1.8 m in diameter, was uncovered in one of the rooms. Its unusual size was apparently meant to serve a large group of people, which raises the question of whether the complex was a monastery and the oven served the community, or perhaps its products were sold to travelers and merchants on the Roman road that ran past the foot of the fort.

The milestone and the results of the research on the Roman administration and army in the territory of Sussita were presented during the annual archaeological conference held at the University of Haifa on April 11, 2019.

A winepress from the Byzantine period was found in a Roman-era roofed reservoir in Tzipori (Sepphori...
Read more
22.11.2018

A ‘Beka’ weight from the First Temple discovered in Emek Tzurim

The weight, which was found in the archaeological soil originating from the Western Wall foundations...
Read more
1.8.2021