Close
Israel Nature and Parks Authority > News > Has the ancient gate of the town of Bet She‘arim been found?

“As far as we know, a settlement like this should not have been surrounded by a wall and therefore it is almost obvious that the name Bet She‘arim was not associated with the word ‘gate.’ Now we have to rethink this,” said Dr. Adi Erlich of the Zinman Institute of Archaeology at the University of Haifa. 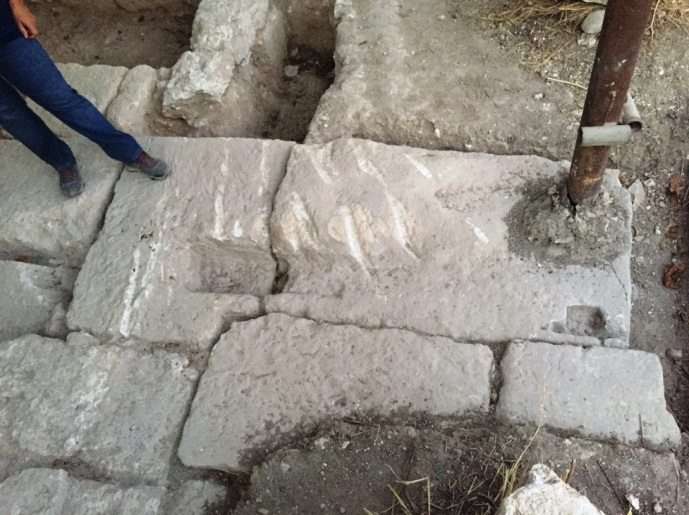 The threshold of a large gateway and a tower built of large, dressed stones was discovered during excavations by the University of Haifa at Bet She‘arim, the seat of the Sanhedrim in the second century CE and the home of Rabbi Yehuda Hanasi. But although today it might seem logical that a place with the name “Bet She‘arim” would have a gate (the name means “house of gates”), the discovery was a great surprise because during that time, towns like this usually were not surrounded by walls and certainly did not have gates. “As far as we know, a settlement like this should not have been surrounded by a wall and therefore it is almost obvious that the name Bet She‘arim was not associated with the word ‘gate.’ Now we have to rethink this,” said Dr. Adi Erlich of the Zinman Institute of Archaeology at the University of Haifa.

Bet She‘arim, situated in the Lower Galilee, was a Jewish settlement during the Roman period that reached its zenith in the second and third centuries CE. During this time, Rabbi Yehuda Hanasi,  made it his home, which turned it into the seat of the Sanhedrin, the highest Jewish court at the time. However, small settlements like Bet She‘arim and especially relatively small Jewish settlements were usually not surrounded by walls and did not have gates in the Roman period. And indeed, until the surprising recent discovery by scholars from the University of Haifa, no such wall was found, and certainly no gates. Some scholars even sought another source for the meaning of the name. But it seems that the current excavation is completely changing the picture.

The excavation at Bet She‘arim began in 1936 following the discovery of a cave with a relief of a seven-branched candelabra (Cave 1) by the pioneer Alexander Zaid. Now, 80 years later, Tali Zaid, his granddaughter, is associated with the new find.

Although the focus of the Bet She‘arim excavation is within Bet She‘arim National Park, a few years ago, a number of ancient stones were found in the yard of Tali Zaid’s home, located in Moshav Bet Zaid, near the national park. With her permission and on the recommendation of the Israel Antiquities Authority, this year Dr. Erlich, who has been excavating in the national park since 2014, expanded the dig to include Zaid’s yard. In no time, the excavation revealed an archaeological treasure – a tower built of ashlars (dressed stones), next to which the gate threshold was found, almost 4 m wide and with hinges for closing a double-winged gate. From the gate, a road was found leading to the town. Not only was a wall and a gate found in a town that was not expected to have been fortified at all – the threshold had a groove in the stone for a large lock. “This is certainly a big surprise. Most settlements in the Roman period were not fortified, certainly not a relatively small Jewish settlement that was not even considered an official Roman city. In the north there were a few fortified Jewish settlements, like Yodfat, but even those settlements, which were large and important, did not feature a large, impressive gate like this one,” Dr. Erlich said. By the way, Prof. Nahman Avigad, who uncovered a “gate” and a “wall” next to an olive press and now adjacent to the road, changed his mind about them.

So what reason could there have been to fortify the town? Dr. Erlich explains that Bet She‘arim was home to wealthy and highly respected Jewish leaders, and was also an estate from which taxes were collected for Queen Berenice in the first century CE. One hundred years later it became the seat of the Sanhedrin and the home of Rabbi Yehuda Hanasi, one of the wealthiest and greatest Jewish sages of his day. Nearby was a cemetery that attracted wealthy Jews from the Land of Israel and the Diaspora. “It could be that the great wealth of the city, where splendid public buildings have been found, accounts for the unusually large and well-constructed gate. Large and impressive gates may have surrounded the city, giving it its name – Bet She‘arim. The exact date of the fortification is still unknown and will wait until the rest of the fortification is uncovered in the future. Another possibility is that this was an important fortress that was built at the site during the Roman period and we have uncovered the gate house,” Erlich says.

Another discovery, outside and north of the gate was a round pottery kiln, also built of ashlars, dating to the end of the fourth century CE. In the upper part of the kiln remains were found of a glass industry; it is believed that in the second half of the fourth century the area north of the settlement was where polluting industries – glass and pottery kilns – were situated. According to Dr. Erlich, when the kiln was built the earlier gate was apparently no longer in use. 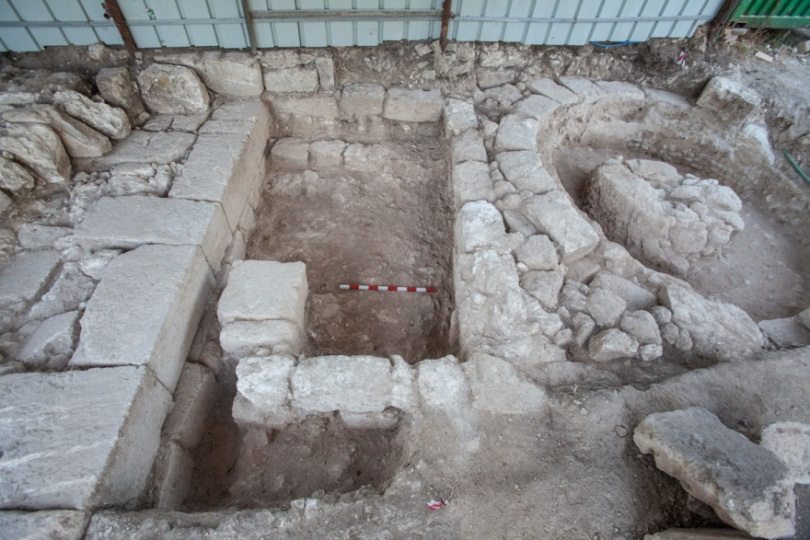 At right, the kiln and at left, the gate. Photo: Fanny Vito

וThe gate was discovered in the fall of 2016, during the third excavation season at Bet She‘arim, under the direction of Dr. Adi Erlich for the Zinman Institute of Archaeology at the University of Haifa. The dig took place within Bet She‘arim National Park and at the Zaid house in the nearby community “I thank the Israel Nature and Parks Authority, Bet She‘arim National Park, the residents of the community and the Zaid family, the Israel Antiquities Authority and the Emek Yizre’el Regional Council for their support and encouragement,” Dr. Erlich says. 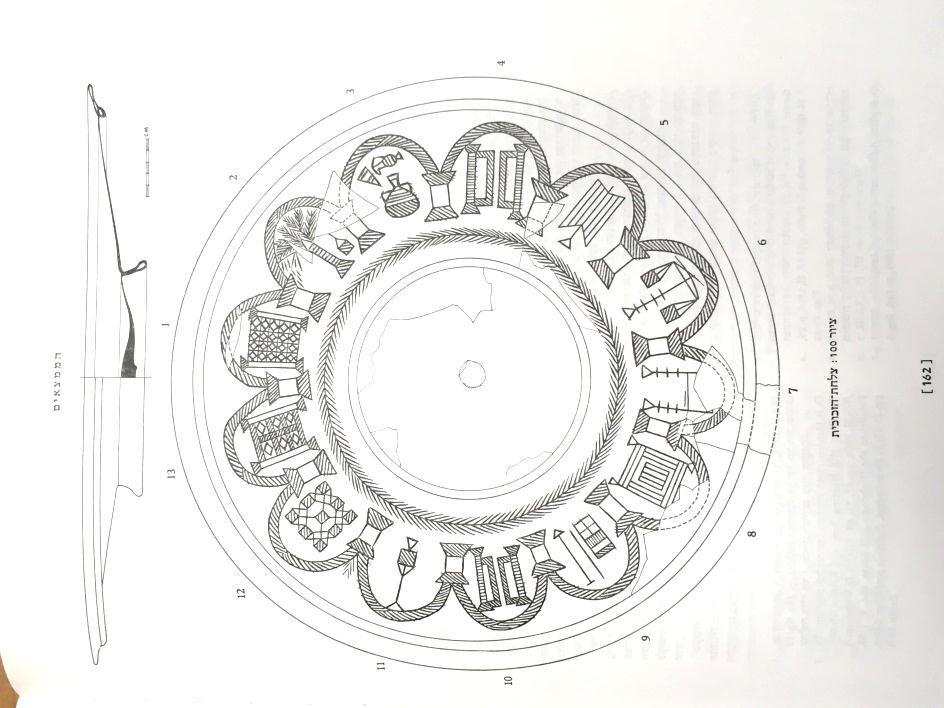 And with or without reference to the gate, in cave system 15, Prof. Avigad’s excavation unearthed, a decorated glass plate incised with 13 arches, resembling gates. The plate is on display in the permanent exhibition of the Israel Museum.​

From “Archaeology News” by Tsvika Tsuk

Last week, kids from the United States who came to Israel to tour their heritage were amazed at what...
Read more
14.12.2017

The large royal winery now being unearthed at Herodium sheds light, among other things, on the reaso...
Read more

A winepress from the Byzantine period was found in a Roman-era roofed reservoir in Tzipori (Sepphori...
Read more