Elsa Barak decides to donate the money she received as part of her bat mitzvah celebration, as well as her time and effort, to help the marvelous creatures that play an important role in the ocean's ecosystem

Elsa Barak is no ordinary Israeli teen, rather she’s on a mission: to help save sea turtles.

Barak – whose parents, Dorian and Daphna, made aliyah from the United States and France (respectively) – celebrated her bat mitzvah about two years ago, at the height of the coronavirus pandemic. But rather than spend the money she received as birthday presents, she decided to dedicate it, as well as her time and effort, to saving sea turtles.

During one of the family’s beach outings, Dorian met Matan from the ” Israel Nature and Heritage Foundation of America” (https://inhfa.org/) and it was, according to them, “love at first sight”. Thanks to the foundation’s involvement and the Bar / Bat Mitzvah project, Elsa has started working more significantly for her favorite turtles, and she stars in a video to promote the subject:

The origin of sea turtles dates back to the Late Jurassic era – some 150 million years ago – and they can be found in all oceans except for the polar regions.

There are currently seven species of sea turtles and they play a key role in ocean ecosystems by maintaining healthy seagrass beds and coral reefs, providing key habitats for other marine life, helping to balance marine food webs, and facilitating nutrient cycling from water to land.

Soon enough, Barak’s entire family enlisted in the effort to save sea turtles, participating in activities such as cleaning beaches, frequent visits to the Nature and Parks Authority’s National Sea Turtle Rescue Center, and setting up a donation website and a crowdfunding campaign. The Israel Nature and Heritage Foundation of America also contributed to these efforts.

Last August a wounded loggerhead sea turtle arrived at the STRC, having been caught on a fishing hook. The fisherman reported the incident to the NPA, which allowed the giant reptile to receive immediate medical attention, including surgery to remove the hook lodged in its esophagus.

Barak followed the case closely, and after several months of rehabilitation at the STRC, the tortoise was declared fit to once again roam the ocean.

Over the weekend, the sea turtle – now dubbed “Elsa” – was successfully released back to the ocean, with NPA and STRC staff, as well as the Barak family and a host of their friends there to see it off.

Prior to taking the plunge, tortoise Elsa was fitted with a special satellite transmitter on its armor, to provide information on the movements of the sea turtle population in the area. 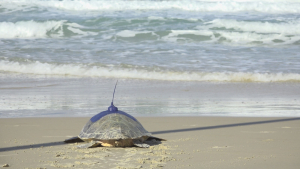 The money donated by Barak and her family funded the cost of the GPS transmitter – a device that runs upwards of 6,000 shekels ($2,000).

All species of sea turtle are listed in CITES Appendix I, restricting international trade of sea turtles and sea turtle products in an effort to stabilize their population.

” Israel Nature and Heritage Foundation of America” assists the Israel Nature and Parks Authority in the important tasks of preserving nature, landscape and heritage in Israel with the help of a unique connection of private companies and valuable projects.​

Opening hours will be extended at many sites during October, with sites open until 6pm or even later...
Read more
6.9.2022

Discover the thrilling new tourist experience that was conceived and became a reality during the COV...
Read more
6.9.2022