Mating season - Nesting on the eggs

The Israel Nature and Parks Authority has been working since the 1980s to protect turtle eggs and their hatchlings. Every year during laying season (from May to August), Israel Nature and Parks Authority rangers scan the beaches each morning looking for sea turtle tracks. In places where they find tracks made by females when they emerge from the sea to lay their eggs, they concentrate their efforts on finding and rescuing nests. 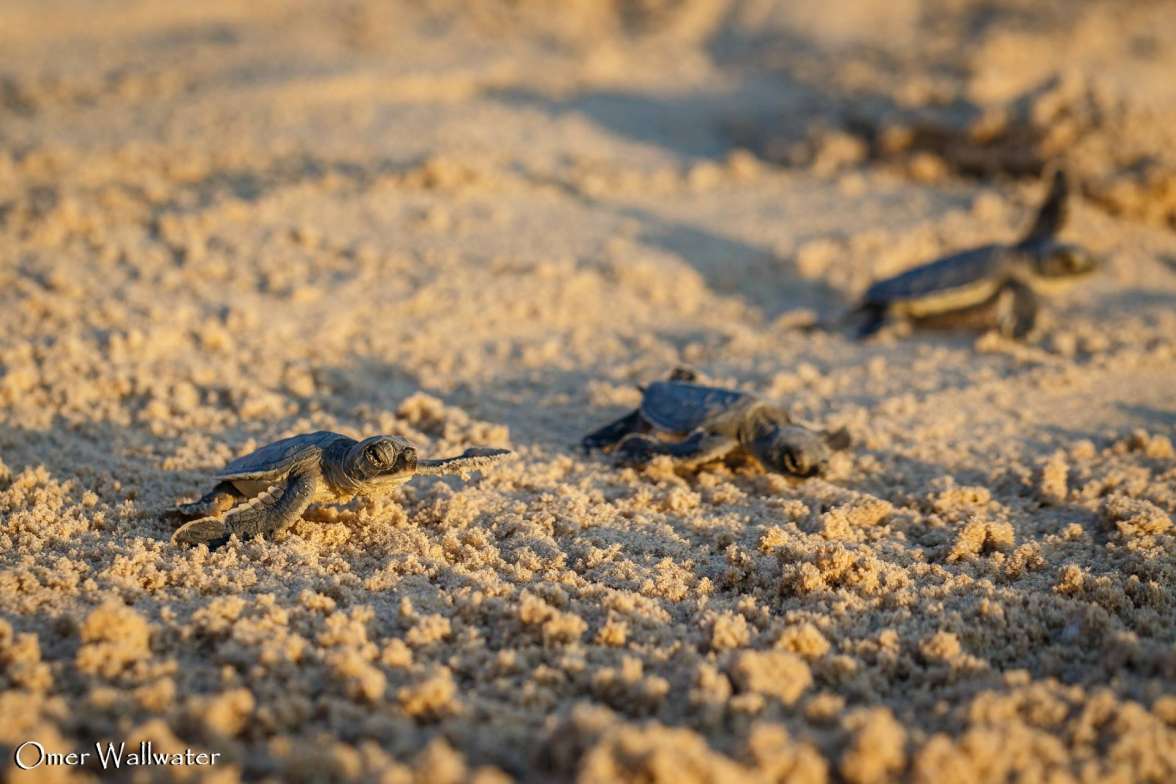 A loggerhead turtle lays about two clutches once every two years or so, each nest containing about 80 eggs. The female green sea turtle lays about three clutches once every three years or so, with about 130 eggs per nest. In natural conditions, only one hatching on average will reach sexual maturity and be able to reproduce. As for the rest – some eggs will be eaten before they hatch, others will be killed at sea by natural predators or as the result of human actions. The takeover by humans of nesting beaches has led to additional damage to reproductive efforts, because females have trouble nesting due to light, noise and construction along the beach, and hatchings lose their way to the sea when they follow artificial light. Thus, improving the survivability of the eggs is expected to accelerate the recovery of the population.

That is why the Israel Nature and Parks Authority has been working since the 1980s to protect turtle eggs and their hatchlings. Every year during laying season (from May to August), Israel Nature and Parks Authority rangers scan the beaches each morning looking for signs of sea turtles. In places where they find tracks made by females when they emerge from the sea to lay their eggs, they concentrate their efforts on finding and rescuing nests.

Most of the nests are brought to enclosed incubation farms, in a complex process that requires skill and great precision. Israel Nature and Parks Authority rangers undergo training in Israel and abroad so they can transfer the eggs without harming them – unskilled hands can seriously damage the embryos and their development!​​

At the incubation farm, the nest is documented and covered with a metal cage until the expected hatching date, about two months after the eggs are laid.

During hatching season, from August until October, Israel Nature and Parks Authority volunteers are on duty at the incubation farm every night, waiting for the hatchlings to emerge. When the turtles emerge from their eggs, the volunteers open the metal cage over the nest, count the hatchlings and accompany them on their crawl to the sea.

Moving the nests to enclosed incubation sites and watching over the hatchlings as they crawl to the sea increases the number of offspring that make it to the sea by preventing predation of the eggs and the hatchings on the beach, and preventing hatchings from dying by crawling in the wrong direction. In addition, the location of the incubation farms in coastal nature reserves is expected to have a long-term impact on the females, who will return to nest on those same beaches, since females usually nest on the beach where they hatched.

​​The egg-transfer project has been underway for 30 years now, about the same amount of time it takes for sea turtles to reach sexual maturity. Thus, recent years have seen a gradual rise in the number of nestings on Israel’s beaches, especially of loggerhead turtles.

After a decade-long search of the Gulf of Eilat waters, an endangered female green sea turtle was si...
Read more
19.7.2018

Israeli nature is a home for other species of turtles in addition to sea turtles. In addition to the...
Read more