The population of green sea turtles (Chelonia mydas) and loggerhead turtles (Caretta caretta) in the Mediterranean Sea has fallen dramatically over the past 100 years. From the day they hatch they are exposed to hazards and dangers. They face not only natural predators and disease, but also threats from human activities on the beach and at sea; all of these have led all seven species of sea turtle worldwide to the brink of extinction. Sea turtles are also hunted illegally worldwide, and are harmed by unintentional fishing, pollution at sea and on beaches and loss of habitat and nesting grounds. 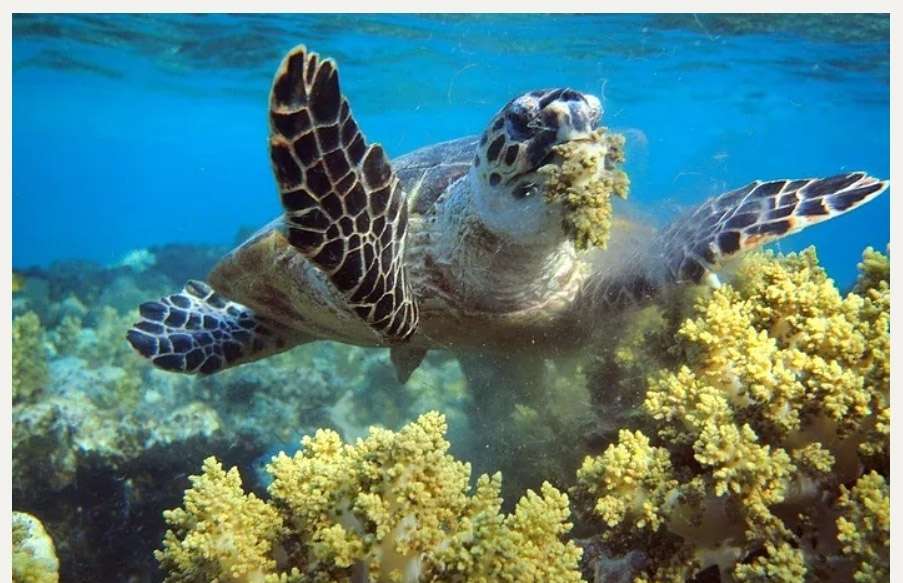 Pleased to meet you, Sea turtle

Sea turtles are marine reptiles that developed about 200 million years ago from land turtles. Sea turtles are adapted to life in the water, but they still share some traits with their land-bound brethren.

Like all reptiles, sea turtles are cold-blooded. This means that they can’t regulate their body temperature and therefore it is always the same as their environment (except for the leatherback sea turtle). Because of this, sea turtles are very sensitive to extreme temperature changes, and can’t survive in very hot or very cold water. In general, sea turtles can live in temperatures between 17 and 30 degrees Centigrade.Sea turtles are marine reptiles that developed about 200 million years ago from land turtles. Sea turtles are adapted to life in the water, but they still share some traits with their land-bound brethren.

Like land turtles, sea turtles breathe air, even though they live in the sea. They don’t have gills like fish, but breathe through their lungs, just like humans. To breathe, sea turtles rise to the surface, lift their head out of the water and breathe through their mouth. However, sea turtles breathe less frequently than humans and so they can remain underwater for longer periods. How long? That depends mainly on the temperature of the water and how active the turtle is. When the water temperature is fairly low, a healthy sea turtle can sleep on the seabed for a few hours straight. If the turtle is busy swimming, and the water is warm, it will have to take a breath every few minutes. The maximum recorded time that a sea turtle remained submerged in the Mediterranean Sea is 10 hours!

More evidence that sea turtles came from land turtles can be found in the way they breed. While male sea turtles spend their whole lives in the water, the female emerge onto land to lay their eggs. Every year in the breeding season female sea turtles all over the world come out of the water onto the beach, dig a hollow a few dozen centimeters deep, and lay dozens of eggs. When she finishes laying her eggs and covering them up, she will return to the sea and never meet her offspring. The hatchlings will emerge about two months later, leave the nest and crawl toward the sea. During the incubation period on the beach and the crawl to the sea, a process called “imprinting” takes place, which enables the females to return to lay their eggs on the same beach where they themselves hatched. 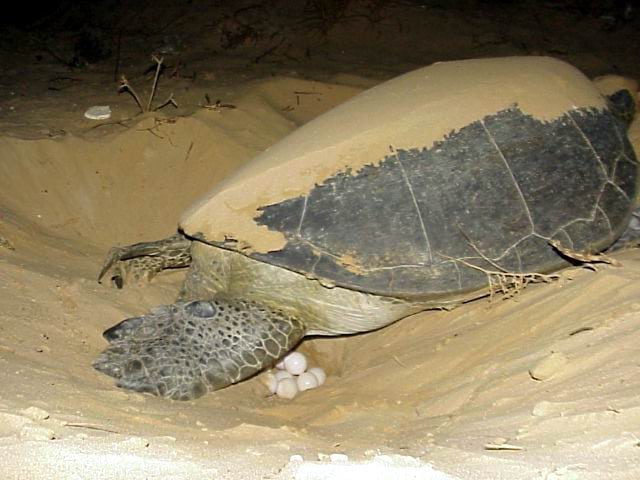 Sea turtles are solitary creatures. They meet only to breed, or in chance encounters in feeding zones. They migrate hundreds of kilometers over the course of their life to seek food and suitable living conditions, and return to their nesting beach to breed. Sea turtles in the Mediterranean reach sexual maturity at between 20 and 30 years of age. Only then can the males and the females be differentiated: While the tail of the female remains short, the male develops a long tail that also serves as its reproductive organ.

A sea turtle’s diet depends on its species and stage of development. For example, young green sea turtles feed on invertebrates like starfish, crabs and cuttlefish, but as adults they are almost total vegetarians. The diet of loggerhead turtles, in contrast, consists mainly of invertebrates throughout their lifetime.

Who eats sea turtles? Most marine predators can’t eat a large, healthy sea turtle, mainly because of its hard protective shell. The exception to this is, of course, large sharks. But when turtles are young, predation is a real threat. Even sea turtle eggs are in danger – they’re a favorite food of foxes. As the hatchlings crawl to the sea, they might be caught and eaten by sand crabs or by aquatic birds like gulls. When the baby turtles finally reach the sea, they find large fish and other predators waiting for them. The dangers that threaten young sea turtles are many, and continue throughout their lives: Out of 100 hatchlings, only one will reach sexual maturity.

Adult sea turtles are less threatened by predation, but they face injury every day from human activities on beaches and at sea. Today, all seven species of sea turtle in the world are endangered. 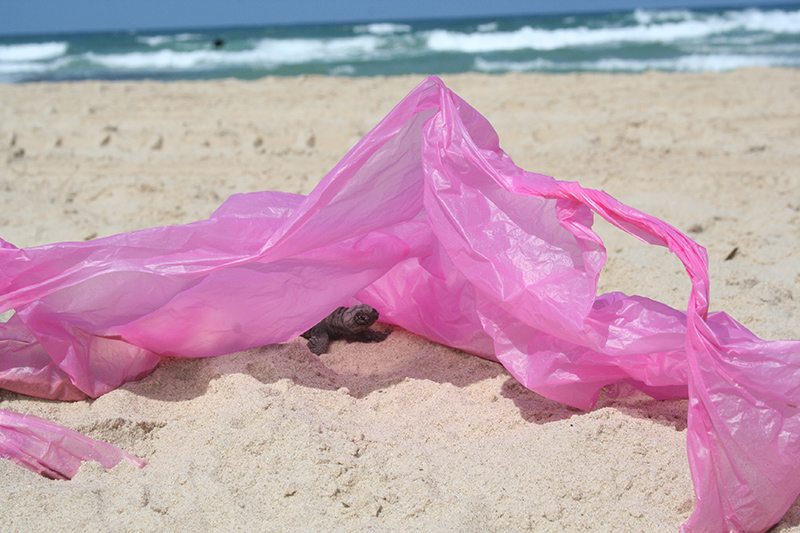 A young turtle entangled in a plastic bag

And so, in fact, green sea turtles and loggerheads are the only ones who nest on Israel’s beaches. Breeding season for these two species in our region is between February and June, when the males and the females meet near the beach to mate. Mating itself takes place on the surface of the water or underwater, and can go on for hours. The female might mate with different males and retain the sperm in her body, so the clutch of eggs she lays might contain the offspring of different males.

Female sea turtles usually return to lay their eggs on the same beach where they were born. However, during laying season, the female might lay one clutch on a beach far from where she hatched. This phenomenon is apparently a natural means of geographical species distribution and a survival mechanism in case a nesting beach is destroyed – not to keep all their eggs in one basket!

About two months after the eggs are laid, over the summer, the hatchlings will emerge in the dead of night, and navigate their way to the sea. The first to hatch will kick the other eggs in the nest, encouraging their siblings to come out as well. They don’t leave the nest immediately; instead, they stay there for up to three days. When they hatch, they still have a nourishing yolk sack attached to their belly. A few days later, when the yolk sack is empty, dries and falls off, the point where it was connected to the hatchling’s belly will close. Only then are the hatchlings ready to leave the nest and crawl to the sea. Hatchlings will usually leave the nest together in the dead of night.

In the Mediterranean Sea, sea turtles lay their eggs mainly on the eastern coast. Experts estimate that there are about 2,500 laying female loggerhead sea turtles and only about 450 laying female green turtles in the Mediterranean. In Israel there are about 150 laying loggerheads and only about 15 laying green sea turtles. The Israel Nature and Parks Authority is working to rehabilitate the population of turtles in the Mediterranean, both loggerheads and green sea turtles, through two long-term projects. One is the annual nest-transfer management project in which sea turtle nests are moved to enclosed incubation farms for their protection. The other is the Green Project – a breeding nucleus for green sea turtles. The INPA also works to save sea turtle species by declaring marine nature reserves, treating injured sea turtles at the rescue center, studying and monitoring sea turtles and increasing public awareness through guided tours and reports in media outlets and on social media.

Sea turtles are exposed to hazards and dangers from the moment they hatch. When hatchlings leave the nest, they navigate to the brightest light. On abandoned, empty beaches, the sea is the brightest element on the beach due to moonlight reflecting on the water and the glimmering foamy waves, to which hatchlings navigate successfully. But on many of Israel’s beaches, lights from roads and from restaurants and other buildings confuse the hatchlings and lead them in the wrong direction. Many hatchings die of exhaustion on the same night they hatch. Others reach nearby roads and are run over. Those that survive the night but don’t manage to reach the sea, might die the next day due to exposure to the sun, be run over by vehicles on the beach or eaten by various animals.

When the hatchlings reach the sea, like adult sea turtles, they will have to face a host of existential challenges. They become entangled in refuse floating on the surface of the water, like fishing nets, ropes and plastic bags. They are hurt when they run into a patch of oil that could coat their bodies and enters their respiratory and digestive systems. They might be caught in fishing nets or fishhooks, or struck by boat propellers or by machinery involved in infrastructure work at sea.

Sea turtles are sometimes a purposeful target: They are hunted illegally throughout the world for food and for their shell, which is used as decorative art in various cultures. Turtle eggs are considered a delicacy in some cultures, and are stolen from nests and sold for food. In the 1930s, green turtles were hunted methodically in the Mediterranean Sea. About 2,000 sea turtles a year were hunted on the coast of this country at that time, which severely damaged the local turtle population.

Sea turtle populations also suffer from destruction of their nesting beaches – the result of the increased use of beaches by humans. Homes and hotels, restaurants, roads, industries and ports all restrict the availability of nesting beaches. Noise, bright light and human presence on beaches at night disturb and frighten females emerging to lay their eggs. A female sea turtle that does not find a proper place to lay her eggs will return to the sea without doing so. She might try again the next night, but if she fails again, she might lay them at sea, in which case they will certainly not survive. Or, what’s worse, she might not lay them at all, and they will decompose in her body and kill her.​

Sea turtles throughout the world are severely endangered. We did this, and it’s up to us fix it.

Israeli nature is a home for other species of turtles in addition to sea turtles. In addition to the...
Read more
20.5.2019

The Israel Nature and Parks Authority has been working since the 1980s to protect turtle eggs and th...
Read more